All You Need To Know About Sons of Horus Kratos. 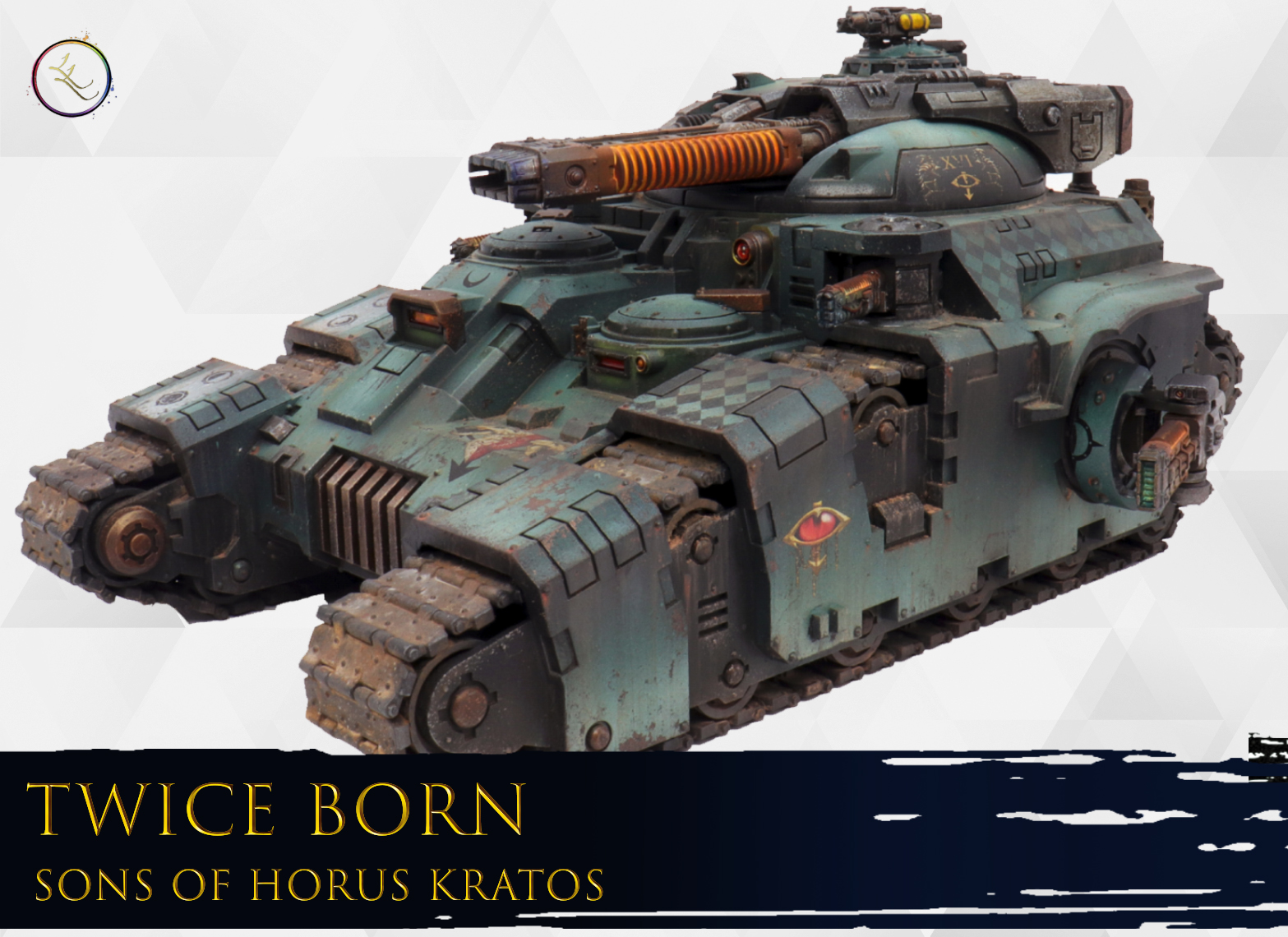 “The Legionaries Astartes had a huge hole in their battle line – they needed a mainline battle tank.”

We already had superheavies. We already had smaller support vehicles based on the Rhino chassis. So it’s lovely to get a tank that sits neatly between these classes. A donkey to carry the straw, a rock upon which the wave breaks. Considering this helped launch the Age of Darkness 2.0 I had to include it in the force. The Twice Born – the Heresy anew, a new collection of Sons of Horus. It all seemed to fit together.

When I approach any project I generate key symbols that run through the force. My praetor Gedephron Merisi, uses the Cthonian wolf as his personal heraldry. This motif is carried throughout the army to bind them under his stewardship. However, The Sons aren’t that simple.

Unlike the Ultramarines, Fists, or other Legions that lean toward symbolic orthodoxy, the Sons of Horus are instead a host of warbands. Companies gather behind the leadership of charismatic warlords, who dictate strategy as they see fit. Some are close combat orientated, others prefer heavy elements. When a spear tip strike is declared, warbands freely ally themselves together, exploiting their specialties to mutual benefit.

This gives us a tremendous amount of shifting visual references, right down to squad level. For this project, we have three key elements: The Cthonian Wolf, the chequers, and the sequences of the moon.

Tightly bound to the idea of the Mournival, the phases of the moon are an important symbol of the Legion.

The significance faded with the change from Luna Wolves to Sons, but I felt it was appropriate to add it to a vehicle that was a mainstay of early Legion warfare. The white is fading to sea green, worn and chipped. The phases of the moon represent the proud history of the vehicle: it has served with each member of the Mournival during its service.

Whether it was the Mournival of Sejanus era or Kibre, we’ll leave historians’ to debate. I do like how uneasy this remnant sits in relation to the rest of the force. Do the crew harbour doubts over the future of the Legion as it heads to Terra? Or is it a symbol that the newly indoctrinated crew doesn’t understand, and maintains out of duty?

Oh yeah, there’s a reason why the phases of the moon have been placed as they have.

Chequers on the Sons Of Horus Kratos.

Unlike the phases of the moon, I have no real idea why I used the chequered pattern. It came to me in a dream. No, I’m not lying! I rarely dream of colour patterns or miniatures, but I very clearly remember dreaming of this pattern on the tank. It just works though, I have no idea why. A friend mentioned that it reminded him of Rogue Trader, and perhaps I had this image floating around my head before falling asleep that night.

Whatever the inspiration or meaning, I’m keen to use this across all the Sons of Horus vehicles. Perhaps I’ll create a tank commander at the end of the project who is half harlequin?

The Cthonian wolf is fairly straightforward. However I like the idea that Cthonia had no wolves, but instead is infested with a debased form of Hyena that natives assume is a wolf. Perhaps there’s something to mine there – the idea of assumed power, the symbols that tie you to it and the need to legitimize rule with such images? Gedephron is an insecure creature (his whole look apes Horus to grant him assumed authority) – perhaps the false wolf strikes at the heart of the Legion itself?

Perhaps I spend too much time on my own.

There will be a full video tutorial series on this vehicle coming very soon to the patreon!