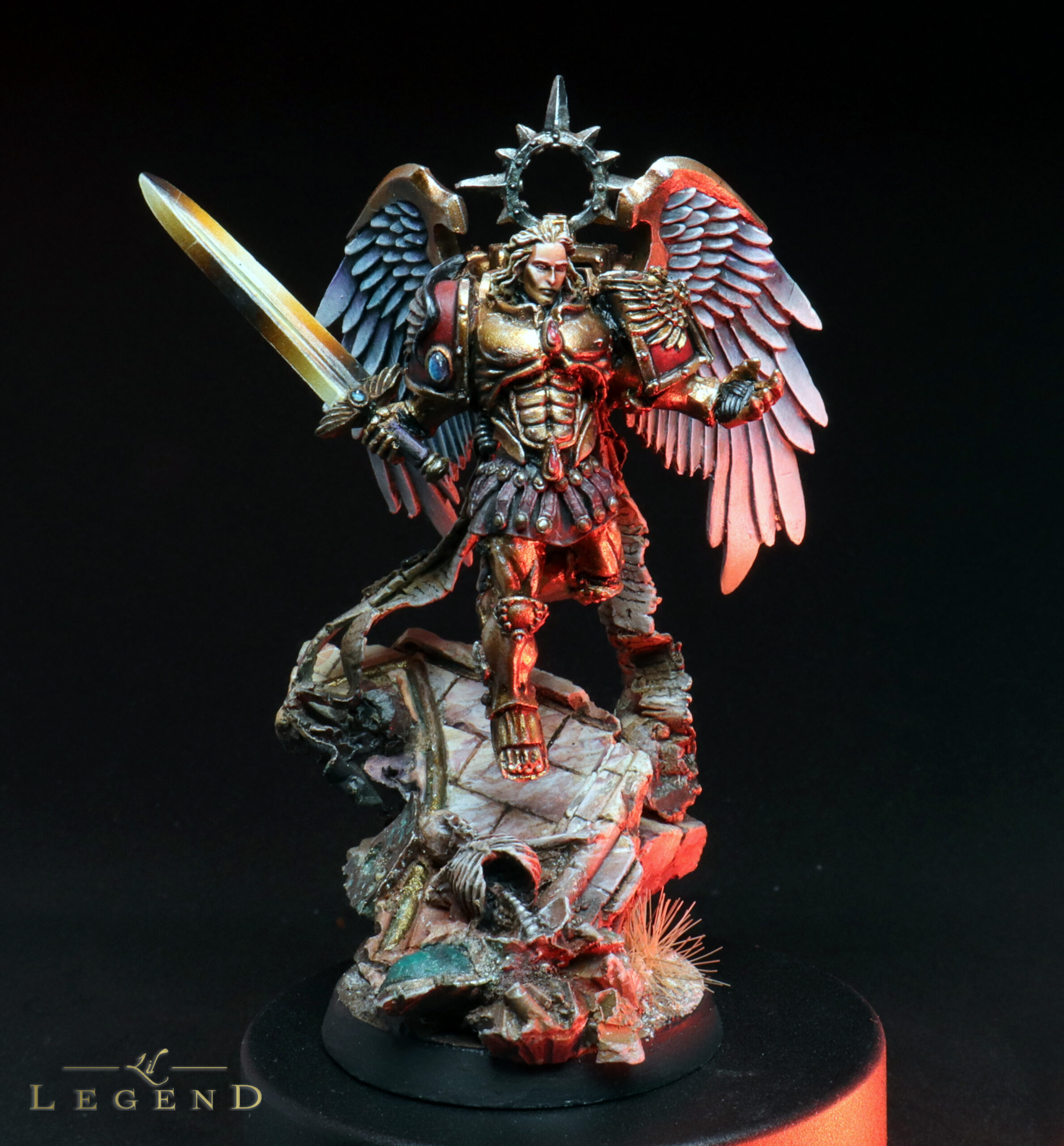 “Throughout history Angels are agents of wrath, or revelation.”
Unknown.

“Charting the histories of the legions after the Fall of the Arch Traitor is a problematic endeavour. In an era rife with misinformation, falsifications, mass purging of data repositories and the reformation of Adiministratum, clear, concise scholarship concerning this era is a messy affair. However is it the burden of this humble servant…[text goes into a lengthy essay about the role of the scholar – edited for brevity]

Excelcio Belarius, named the Encarmine Blade, served aboard the Starfall [Lunar Class Cruiser] scouting the Perditia Veil in the latter part of the Great Crusade, assigned to the protection of Delegates Marcellus Varne. His role of honor includes fighting amongst the First Host at Ullanor, the scouring of Mandax, and is commanded by his superior [Praetor Anchious Obirex] for decimation actions against Third and Fourteenth Legion insurgency.

Belarius is recorded at the Siege of Terra, but in what capacity, and whether he survived, is unknown. It is also unknown whether Belarius side reel pic captures [attached] are the same as those in our records. Due to the obscurity of Baalite naming rituals [here described: Birthname, Suggenia {tribe, brotherhood, kinship}, Frater Name, Atrocican name {does not translate, analogous; choir, ring}, Codifier, Legion Title, Company Designation. Thus, he is named; Khalu of the Varrchio tribe, Excelcio, named Belarius, of the 14th Choir, Sanguinary Guard, Fifth Host].

Post siege of Terra conflicting reports branch. There is little hard, historical fact, only scraps from surviving worlds, conquered by the Arch Traitor and retaken in the wrath of the Souring. The most promising legend concerning Belarius concerns a Chapter relic [cross reference the Encarmine Blade, Sword of Belesarius] gifted to the Serpah Sanguinary by Primarch Sanguinius himself. It is unclear whether the blade was given to Belarius before the Siege, or during the assaults against the walls. It is also unclear whether the blade was in fact the same one wielded by the Primarch, or whether it was a ‘virtue’ {A legion epithet} adopted by this warrior.

We have further contesting references to Belarius throughout second founding mythology [one cannot call such reorganization anything other than a mythos]. Several documents note Belarius as the first Chapter Master of the Blood Angels, contradicting the documented history of Raldoron ascending to this role. If Belarius survived the siege, he would have been one of the Legion’s highest-ranking, and most experienced military commanders, eligible for reassignment as Chapter Master of a second founding chapter.”

– Myths of the Second Founding; Chapter IXX – The Hosts of Baal, Children with Earthly feet. By Adept Historomancer Belquin Levi

I was privileged enough to have been in the hobby when Warhammer Monthly started. As a child, I devoured the stories and spent the proceeding month contemplating the story. The episodic nature of the stories made the tales feel epic. Waiting a month to month to find out if Leonatos was successful in his quest has left an impression on me. From the very first comic strip printed in White Dwarf I was intrigued as to who Belarius was. All we know of him was that he was a mighty hero of the Legion who was gifted a sword by Sanguinius himself and went on to become the first Chapter Master.

I knew from the very outset that I didn’t want the Praetor’s feet to touch the ground and that his countenance should be angelic. A Blood Angel Praetor has a wide selection of aesthetics, ranging from militaristic to the sublime. I have a theory that while the gene therapy of other Astartes makes them look bulbous and overly muscled, for the Blood Angels their inhumanity takes the shape of otherworldly beauty. I also wanted a larger scenic base for him to stand on, akin to other personalities in Forgeworld’s Character series.

The base is made from the Abaddon and Loken diorama, cut up and repositioned. It is also fully magnetised.  The central fallen cathedral nave made the perfect base to attach Astorath’s jump pack to. The model is converted from Sanguinary Guard parts and the Sanguinor. Because this is a Heresy era piece I didn’t feel non metallic metal to be appropriate (it has a slightly cartoony feel, at least when I do it, that is at odds with hyper-realistic dirt and weathering look of the Heresy). The metals I used are a combination or Forgeworld’s excellent gold paints and Vallejo’s airbrush metallic paints. I shaded the metallics with inks for tonal variation and oil paints for the very deepest recesses.

This is the second rendition of this character. I have refined the lights on the armour, sharpening some details and giving the paint job an overall polish. The naming schemata of his title was lifted wholesale from the Apologist’s wonderful blog entry.