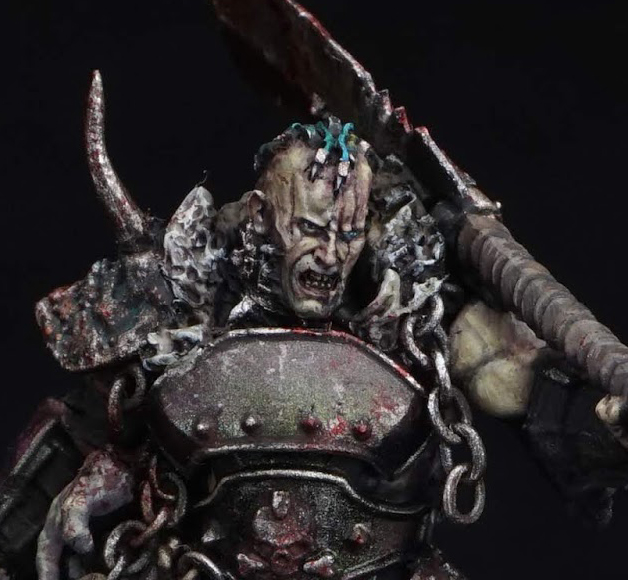 Faith, like a jackal, feeds among the tombs, and even from these dead doubts she gathers her most vital hope.

The Furnace Jackals were my first foray into the latest edition of Necromunda. I normally play Spyrers, or Redemptionists, but without rules, I decided to slap some colour onto one of the gangs from the new set and give them a whirl. I like playing armies/ collections with lots of speed, manoeuvrability and adaptability – the Goliath’s are not that.

I found out very quickly that the Goliaths haven’t got the speed to get into melee quickly, or the numbers to win a long-range firefight.

What they are, however, is dumb, and tough.

Get a combat shotgun in range and it will put most things down. You just have to make sure you get there. Combat cards, skills and pure blind luck all played their part in winning. For example, a Van Saar opponent bottled after discharging a plasma weapon without the Jackals firing a single shot in anger. Taff Sump may belong to the Escher and roving bands of fanatics devoted to the Cult of the Corpse Emperor, but the Jackals ar the hardest Goliath’s in Town.

The Gang is led by Zhargo, a particularly vicious vat bred piece of muscle that hasn’t thrived in the new settlement. His right leg is near useless with a damaged knee, and his muscles are slowly ossifying, slowing him down but making him practically impossible to hurt with small arms fire. His greatest achievement to date is decapitating his rival Goliath Boss (who promptly stood back up and fled into the hive, half his brainpan slopped over Zhargo’s boots).

Klinte operates as the gang’s fixer. Quiet and reserved, Klinte is not like the other members of the gang. Most view him as smart, but he’s probably a little slow – the wrong balance of choler to bile in his creation.

Internet wisdom would have it that the grenade launcher is the best weapon a Goliath ganger can have. Personal experience does not bear that out. He’s stood in the back lines, largely doing nothing at all, which gives me the unusual feeling that my own inexperience isn’t unlocking his full potential. Is he waiting for me to make the right moves before he kicks into gear?

Urggghh, what an asshole. Unless you’re swinging an axe into someone’s head then you aren’t a proper Goliath according to this knuckle head. As if thinking was a crime against the house? Stimmeo left the gang and good riddance. He admired the opposite leader a little too much and didn’t think too highly of Zhargo after he was crippled.

Last I heard he was freelancing as muscle for whoever let him swing his axe around the most.

This lad has promise. Brash yea and likes his neon lipstick and knuckle duster a little too much? Maybe, but put a shotgun in his gangs and he’s an artist. One of the stand- out performers of the campaign, murdering three rivals and landing a nice meaty swing against an Orlock road boss.

These are the kind of ‘scrape it off your boot’ scum that make up the spine of any gang. But don’t give ’em names, it only makes it harder when they get their heads blown off. Game one, that’s what happened to mr shotgun there, and the other two spent most of their time pinned to the floor as if they were being paid by the hour.

Liquify them and use the soup to brew new Goliaths I say. Only good these meat sacks are good for.

Don’t like dogs. Never had. We’re Jackals, we take what we want and don’t whimper when beaten. That’s why this weedy bit string is called a dog. He runs out in front and takes the bullets meant for his betters.

Never seen him use that thing in anger. Pretty sure he was sent downhive as a joke. He spends all day shooting industrial grade rivets that can wield a land raider together into rats, or bugs that live in the hide out. Has this dumb ‘hur, hur’ chuckle. Come to think on it, I haven’t heard him say anything else. Some minds weren’t meant for this world.

And that’s the gang currently. Zhargo has established himself in Taff Sump and has started a breeding program for new Goliaths to explore the Valleys to the North. Rumoured to contain ghosts, druids and archeotech riches beyond measure, the gangs of the settlement are gearing up for a grand tour – after lockdown that is.