How to paint the Lliwaur: Necromunda Chaos Cult 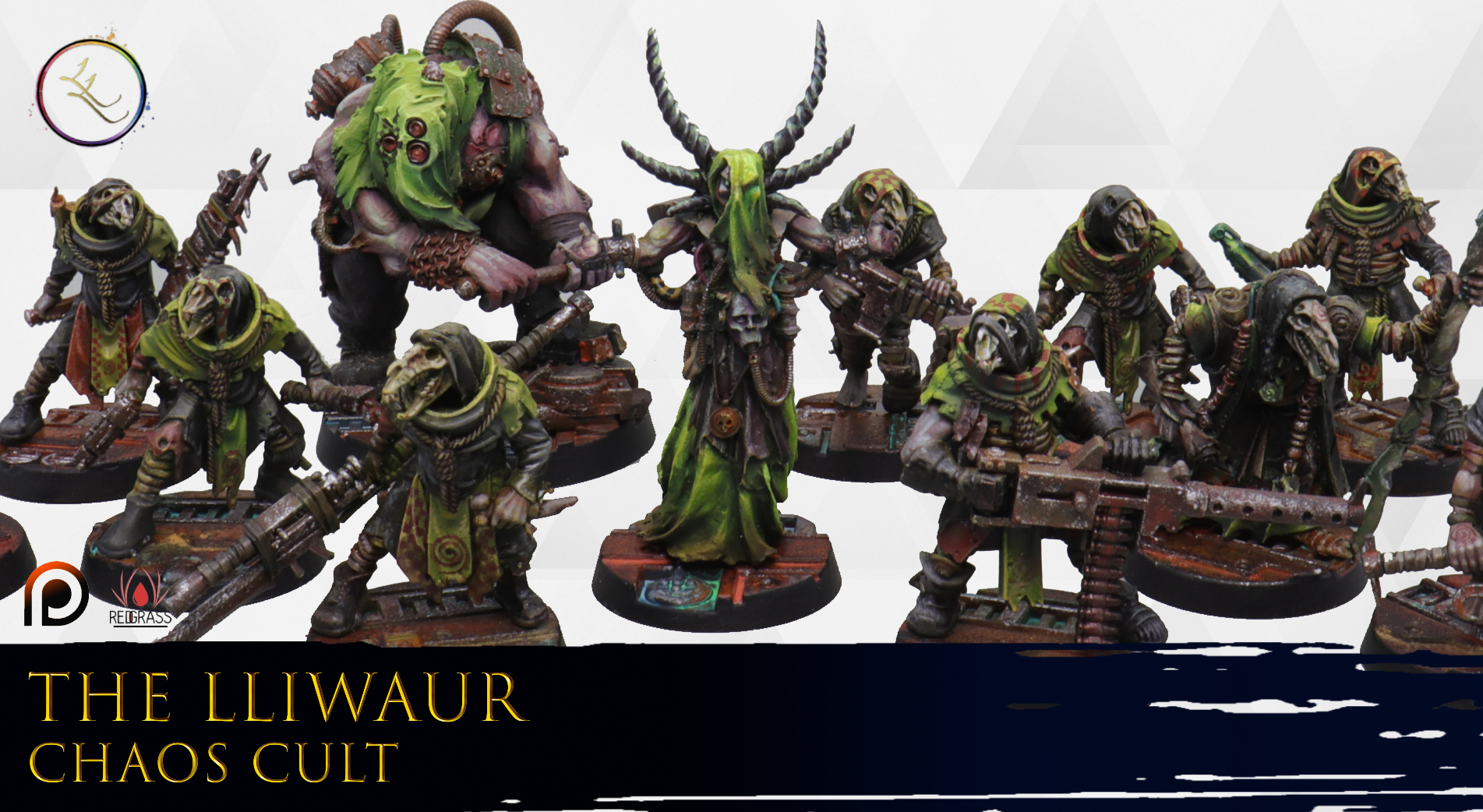 How to Paint Chaos Cult: Sedition breeds like rats in the darkness of the Hive. The mutant, the deviant, and, occasionally, the prophet are all called to make the change from the Sump Bottom-up. No one knows where the tradition of the Mari Lwyd originates, but folklorists believe it is a ritual remnant of pre-Imperial culture.

Once a year, an equine skull is worn by inhabitants of Taff Sump, and revelers are encouraged to talk to the dead. This tradition has taken a darker turn with Carcosa’s rise in influence.

The cults inner belief structure emphasise experiential divinity – that the sublime is within. A codified guide to divinity is worthless as heaven is beyond the Ken of written word.

‘Dreame ye of the Prince beneath the sump.’

A cult dedicated to the inner spiritual awakening of the self. The pilgryms journey is not one of doctrinal lore, but inner revelation. With tantric dreame meditation supplemented with all natural fungi, all may experience the peace of him who Dreames in gold beneath the sump.

On the surface the attract followers through meditative dreame mantras and alternative healing methodologies. This holistic approach to healing has proved popular a sharp contrast to the expensive bone grinders and sell scalpel peddlers of medicine.

This is only a surface understanding of the inner mysteries of he who dreames in yellow. The central tennent of belief revolves around a figure named the prince in yellow who dreames beneath the sump.

It’s this kind of dualistic thinking that has lead to the fAll of mAn.

Reject the teachings of your father.

Reject the lie of the written word.

This is a comprehensive learning resource on How to Paint Chaos Cult. This masterclass takes you through everything needed to create your own Chaos Gang – from conversion through to lore creation. As is often the case with enigmatic leaders, little is known about the man who calls himself Carcosa. The most persistent rumour is that this creature was once a mushroom farmer on the fringes of Taff Sump and the Canolbarth (a network of mountains separating South and North Taff Cambria). The farmer chanced upon a glowing mushroom, that he duly ate, causing a psychic awakening within him.

The written word binds man to false ideals. Reject the word, embrace the spiral. Embrace that which you know to be right without instruction. Burn your fathers creed, turn your back on thier lies, and embrace the inner truth of the spiral without form.

Now Carcosa cultivates an anti-Ecclesiarchy creed that can find fertile soil in the poorly patrolled depths of Taff Sump. In the war of faiths known as ‘Cultmunda’, Carcosa elevated 3 members of his flock to truth, remaking their flesh in the light of the King in Yellow.