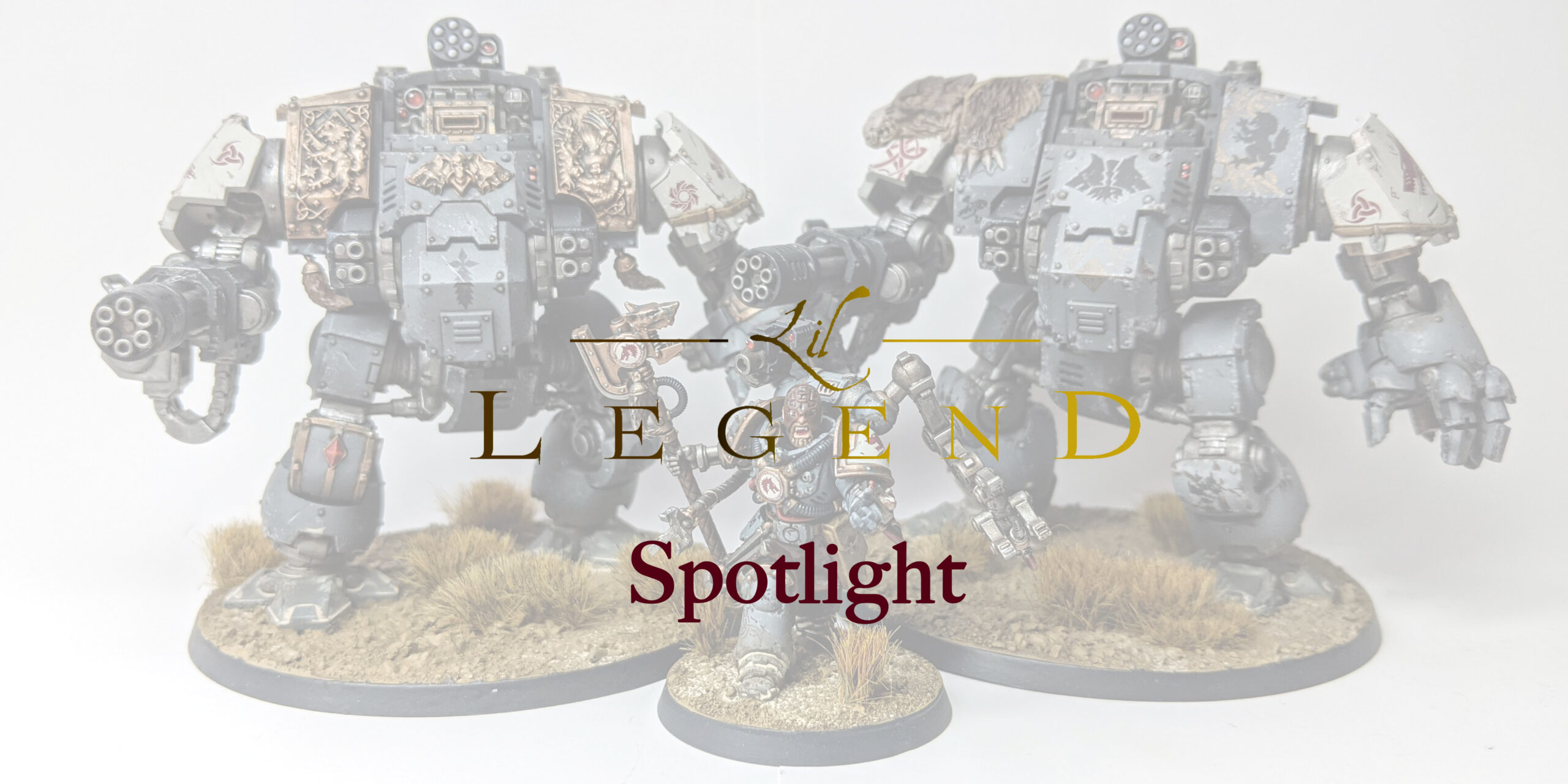 A man might befriend a wolf, even break a wolf, but no man could truly tame a wolf.

I’m Pete or Upplander, author of the Vlka Fenryka Blog and avid space wolf fanatic. I’ve been fortunate enough to be part of a fantastic hobby community and I have had some humbling opportunities to participate in; filming a sage of battle reports for The 30k Channel, interviewing for podcasts such as Geno Five Two and Heralds of Heresy and of course being asked to provide this hobby focus.

My very first introduction to the hobby was as at the age of seven, through my older brother, who had the metal Ragnar Blackmane and metal Wolf Guard Terminator kits which were kept on a shelf I could not reach! (well played Jeff, well played). A short time later my brother decided that they would give me more joy than him and I became their keeper. I have collected and painted for most of my life since then but didn’t really start gaming until I was in my early twenties, and even then, it was very much garage-gaming with a friend. I’ve always been driven by the idea of creating a narrative, either through playing scenarios, the character of a force or a series of models. And since the very beginning I’ve had an affinity for the Space Wolves, although the last three decades have seen many a different project. It’s fair to say my game stepped up when the Horus Heresy novel series, then the Age of Darkness 40k expansion landed, hobby exploded among my friends, new and old. A golden time to be interested in 40k… well 30k.

My initial inspiration for the project was twofold.

Firstly – Prospero Burns, the novel by Dan Abnett, pure and simple. The portrayal of the Wolves in the novel was a breath of fresh air for me, it showed the wolves as I saw them; a Norse/Viking inspired warrior culture rich in pagan superstitions and complex character that I always felt the third edition codex was aiming for. The ‘wolf’ element to their name and aesthetic is still there and fundamental to them but sits as a secondary aspect of their nature.

Secondly – Primaris Marines, they’re a pleasure to paint, whatever your opinion of their lore and introduction into the canon of 40k. The proportions and modelling opportunity was too good to turn down, so I set about creating a Viking inspired force that fit my interpretation of the Space Wolves. I suppose it’d be fair to call it a reimagining of them for 40k, taking cues from their Age of Darkness lore and blending it in.

It seems appropriate to add here, that for me the Wolves are a cadre of warriors, who’s barbarian aesthetic and outward nature is an echo of their Fenrisian beginnings and a smokescreen to their cunning and prowess. They are a warband of pagans with a rich and complex culture who will swear to see a job done, and done it shall be, at all costs if necessary, to ensure their word is kept. They know they’re not part of the Imperium, but necessary to it.

I knew I wanted a solid infantry core, equipped with boltguns (or in this case auto-bolt rifles), that I could add webbing and pouches to, creating a worn hunter aesthetic. It was all about taking the archetype of a marine and making it Vlka Fenryka. I had an idea really early on that I wanted soft leathers for belt and pouches, and I liked the idea of them all having straps on their bolters, just seemed to add that feel of a warrior on the hunt. The Intercessor squads have all been created in this aesthetic.

So definitely a model or unit lead development for the force, adding things I liked the look of or had an idea to convert rather than a written list. Inspiration for a model or unit is key for me. After a few units were finished I looked at seeing how I could make it a playable army, which led me to the 9th edition Crusade ruleset. The Crusade dynamic for 40k is exactly what I want from gaming, a story lead experience where units and characters develop, so that informed some elements of the force; essentially making sure the initial collection fit into 50 power level for example. Rounding out the initial idea of hunter infantry to achieve 50 power level was actually very fun, and I was careful to only add models and units that I felt fit with the feel of the force.

I don’t tend to slog through my armies, I am big believer in only working on units and models I’m enthusiastic about or excited to develop. Admittedly this does lead to the abandonment of projects or small side projects that I know won’t amount to anything larger than allowing me to scratch a particular hobby itch or explore an idea, but it’s a hobby and I’m only ever willing to enjoy it, once it becomes a chore I move on. That includes putting a project aside too, for example my assault intercessors were put on hold for a few weeks when I was about half way through, I’d rather do this and pick them back up when I have the enthusiasm to do them justice.

For me it’s all about narrative and character, every model and every unit has to contribute to the vision I have for a force or faction. This can vary from adding units to keep a force looking believable to the lore and extensively converting models to develop a theme to not taking units that don’t fit the feel I want for the force. I will very rarely add a unit because it performs well in-game, the lore must back up my choices for me to be comfortable with it. I always start with a narrative idea, usually “wouldn’t it be cool to have a force lead by X that does Y” or “I loved how this played out in the novel, that’s how I imagine them, how can I present that literal telling on the tabletop”. I’m not sure it’s a strategy, but more my actual approach. I like to research factions and forces, really immerse myself in the fiction and their lore so I can almost live and breathe their character before committing to a model or army list.

Sometimes things are led by the hobby itself though, for example one of the key objectives I wanted to achieve with this force of 40k wolves was to see how far I could push using decals, cutting them up and applying them to smaller plates and in unique designs. This was a big driver in the aesthetic choice.

I think my favourite aspect of the hobby is the building of a model, applying subtle changes, be they kit bashes or conversions to make a piece unique or pushing a model to fit an aesthetic style. For example none of my Wolves bear any Imperial iconography, all skulls and aquilas have been removed. This is a deliberate choice, not because they aren’t loyal warriors of the Imperium, but because the imperialistic iconography waters down the pagan pseudo-norse aesthetic.

I like to select a palette of colours and materials to apply to an army, keeping that tight allows an army to have a shared aesthetic and feel, but admittedly I do get a lot of stick from my hobby group for my predilection towards subdued colours and lack of vibrance.

2. Do tests, you can’t beat grabbing a plastic spoon or old piece of something from your bits box and testing a recipe on it.

I’ve spent a lot of time over the years trying to replicate the ‘eavy metal style of perfectly neat models, but it’s just not my style. I don’t mean I don’t like the aesthetic, I mean it doesn’t come naturally to me, it doesn’t feel natural to paint like that. I prefer a slightly more rugged feel and how I feel comfortable painting lends to that.

Regarding recipes, I’m not sure. I’m a big fan of using browns to shade and weather models, providing they’re a lighter colour. I don’t feel I’m accomplished or skilled enough to reel off recommendations, but if anyone ever has any questions about how I’ve done things, please contact me on Instagram and I’ll happily talk you through it!

The project is an ongoing one. I don’t think it ever really ends, but perhaps takes pauses. New unit releases, or ideas conjured from immersion in the fiction always inspire additions to a force. That said, I am very proud of this incarnation of the Wolves, and there have been many… (11 I think) they really capture my vision for the Vlka Fenryka.

So far I’ve only managed a handful of games with the army, in the summer of last year. The pandemic sort of put a halt to my plans.

For the few games I have played the Wolves have performed admirably, I however have not! Well not against the calibre of opponents I seem to have to face. Regardless, I’ve been delighted with how the Wolves look on the tabletop and I look forward to developing their story through the Crusade rules.

For the future, well, I have plans. I’m currently working on transports and armoured support for the Wolves, adding vehicles and outriders. Working hard to make sure the worn warrior aesthetic of the infantry translates to the vehicles, through drapes, accessories and practical ornamentation. From there I’m not sure, perhaps a lighter infantry, scouts etc…

Thanks again for the invitation to take part in this initiative Myles, it really has been a pleasure.