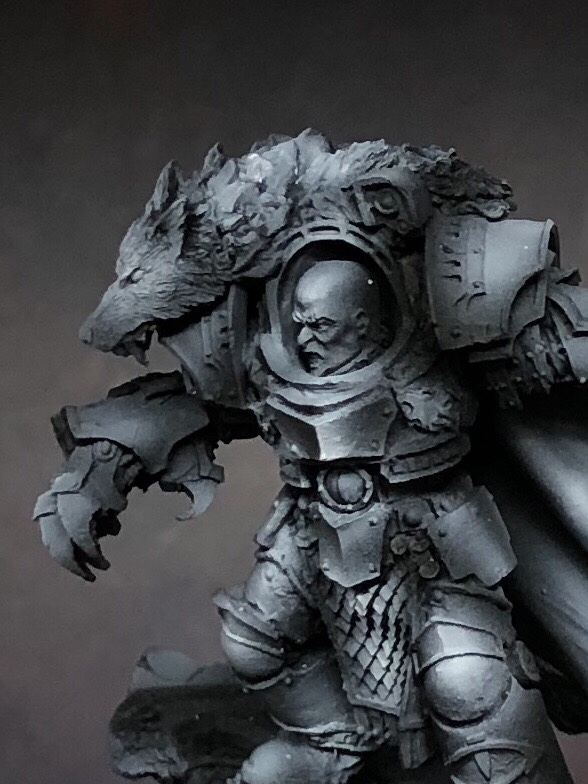 Every project is a chance to explore something new. A new paint, or a new a paint range. A new technique. A new colour that’s intimidated us. I’ve just come across a phrase that fits what I’ve vaguely reaching for, blindly and befuddled.

It’s an art style known as tenebrism, developed by the master Caravaggio. I’ve talked about chiaroscuro and how this style of pre shade underpainting has affected my work, but there’s another distinct aspect to the discipline.

However, this feels like the meme version of the technique, failing to express the cultural context and the religious overtones of light and shadow. It’s something I’m still grappling with and hope to expand it out to a series of tutorials, but for now, this is a style I want to explore.

Deep shadows with stark lighting effects. Abaddon has a preshade that creates this effect already but the praetor is being painted with this principle in mind right from the off.

Why have I built this guy? I figured Abaddon won’t be present at every engagement in the upcoming campaigns. I’ll need a whipping boy I can happily send into doomed scenarios, and possibly grow his infamy beyond this challenge. Here’s a sketch of the lore

Recruited from the northern Cthonian industrial marches, Gedephron was a character well suited to the brutalities of galactic warfare. His strength at arms allowed him to subjugate his fellow man and dominate his contemporaries. Unsuited to independent command, Displaying neither wit, charisma, or imagination, Gedephron was, however, a useful enforcer of legion discipline beneath the eye of his betters. He found favour in the court of Abaddon, locating himself close enough to the center of power to practice his vices without reproach.

Garbing himself in the mantle of a conqueror, Isstvan iii offers a rare opportunity: to prove himself worthy of greater esteem within the legion and become a warlord in the hosts of the war master.

I can’t shake the idea that the sons of Horus are a legion of bullies. Scratch beneath the laurels and there’s not an ounce of nobility to them, even before the heresy. Force of Will yes. Power. Yes. Unattractive traits in a human being, but for a military force that needs to conquer?

Let’s have a look at what our other challengers have been up to this month!

This challenge concludes on the 1st of December (that’s our soft target). Get painting!