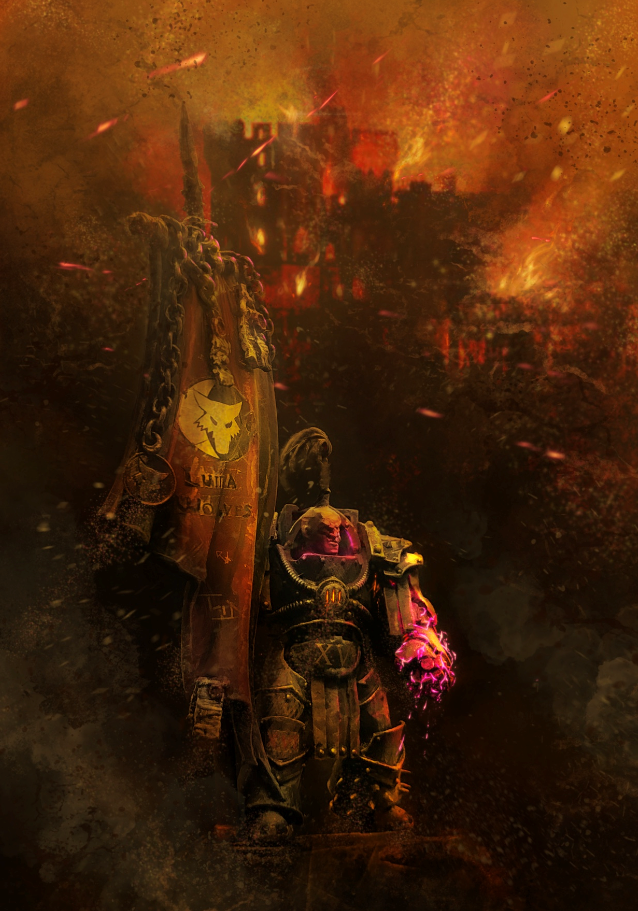 This article throws a spotlight on a student who has developed a Luna Wolf army, but with a hateful twist. Hey, we weren’t the first to do this – White Dwarf legitimized it!

Take it away Phillipe, and dear reader, please be kind.

I loved the Horus Heresy series, and I wanted to bring those characters into 40k. I
liked Loken and Torgaddon, the original Loyalist Luna Wolves. I like to play the neglected, so with the schism in HH lore at beginning of Heresy, playing Luna Wolves was a given. I played Dark elf’s since 5th edition and in the end, Malekith was king, so we never know what will happen! The truth is I liked the image of the ganger; a brutal, simple warrior of the Legions. But I also wanted to play loyalists. What to do?

I use 30k, SoH and Primaris components, mixing them to try and have that ganger look. I have also indede Slave to Darkness miniatures, Necromunda Goliath bits and a random assortment of brutal bits. Anything with spikes, studs and plumes.

I have played them so far in 40k partaking in the Indomitus Crusade, but fully intend to grow the force as the timeline progresses. My army will change depending on the game I play, growing into a battle-hardened force.

I play them with White Scars rule for now, as I like the focus on assault weapons, fast attack. Of all the current rules, I think these reflect the direct, brutal methodology of warfare espoused by the Luna Wolves.

This is where the collection currently stands. I used the White Scar tutorial here to create the off white of the old Legion. It has the warmth of the moon with the cooler blue shadows to differentiate it from other white power armour.